Hey Pals, We're celebrating The Adventure Pals 2nd birthday!! whoo The game is 75% OFF for a very limited time on STEAM, so get in quick if you are reading this and it's no longer on sale if you send me a picture of a giraffe celebrating I will send you a key! To celebrate I thought I would jump into looking at a bunch of numbers, more specifically looking at our revenue over the last two years.

Starting with steam which is one of worse performing platforms accounting for around 9.7% (': Despite this we still get an okay amount of revenue streaming through mainly from sales. You can see below how our life cycle looks at the moment. Interestingly we have sold more this birthday than last. Most likely due to high sale % being 75%. The Adventure Pals audience doesn't really line up well with steam and we figured we would sell nothing and would be dead in a month. But as you can see on steam there is quite a healthy long term lifecycle for sales so the business model turns into making sure you are in every sale you can get in.

You can see from the above graph, sales are mainly the only income, which don't seem to negatively effect sales down the line. From this you can clearly see that sales result in visibility but it's important to have high enough % to break into this barrier of getting past just wish list conversions. However there may be some strategy in doing lower sales and building up more wishlists than doing a bigger sale.

As you can see from our overall sales below, Switch, by far has been our best performing platform, followed by Xbox. Switch sales are a result of being early-ish on the platform along with the different type of audience that uses these platforms being more family & kid orientated, this is why I believe xbox sales have done quite well as well. The Switch platform however sucks at visibility so it's very interesting that we still see revenue trickling in from the platform. My guess is word of mouth is quite strong with switch and has lead to these more long-term benefits. 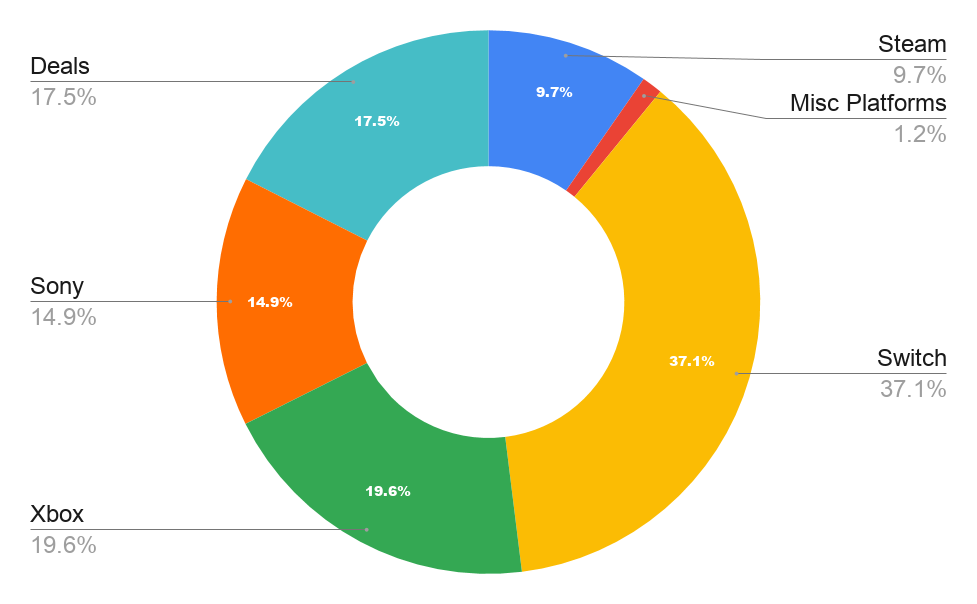 One source of revenue we definitely underestimated was doing deals, deals are by far the most effective way to generate revenue short-term for a game and from looking at the data didn't seem to hurt out life cycle much at all, if anything it helped with word-of-mouth. These deals were with our physical release and doing bundles for the game and nearly resulted in covering the recoup for the game. This is something we will definitely focus on in the future and organising nice and early.

We can also have a look at our life-cycle, unfortunately we only have data from June 2019, but you can see it's still moderately healthy and not what I expected a game two year after launch to look like.

Note this is gross profit (before publisher / developer split)

I would love to share specifics of how much the game has generated, but don't wanna get in trouble with anyone :') I can say however we are very close to seven figures total net. To summarise my findings and to keep this brief:

Okay that's all thanks bye see you next year. - Julian.

Join The Club
Find out what your favourite monster is up to, from eating his enemies to creating cool new games.
© 2021 Massive Monster. All rights reserved.